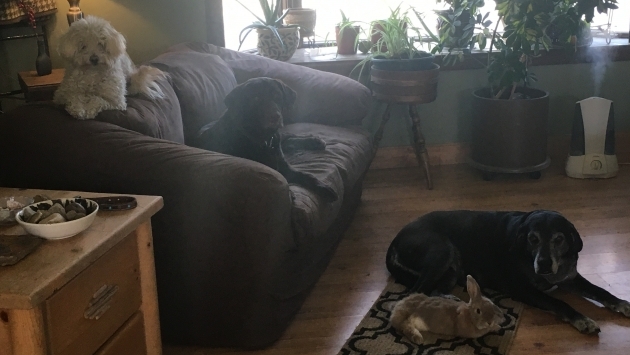 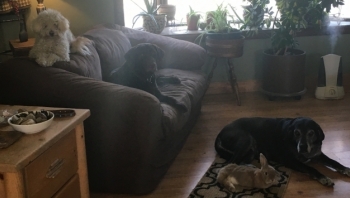 The Menagerie Animal Rescue and Sanctuary (MARS) has nine animals, 7 of which have been rescued and are being rehabilitated. This year the animals will move to a new location on a 35-40 acre site that will offer state of the art accommodations and living conditions. The MARS 9 will be joined by many other animals over the next few months and years. Check out the MARS 9 at The Menagerie's website at MARSanimals.net and follow them on Facebook at Menagerie Animal Rescue and Sanctuary.

Recently, when Clyde, the black cat, experienced some confusing health issues, I contacted a lady that owns a BEMER mat system and had her 'beme' Clyde daily. I am convinced that is largely responsible for Clyde being alive today. (See Clyde's story at MARSanimals.net/animalbios). Cain, the black dog, has been experiencing arthritis in his back knees.He is also a badly broken rescue that has anxiety and other personality issues. When he was receiving BEMER treatments, he regularly ran up and down the stairs and was very social.(See Cain's story at MARSanimals.net/animalbios).

BEMER is an acronym for Bio-Electro-Magnetic-Energy- Regulation. The Bemer works by using electromagnetically transmitted signals to stimulates the pumping movement of the smallest blood vessels, re-normalizing the blood flow in the body. The body’s cells are increasingly better supplied and start carrying out their many tasks such as: fighting disease and pain, healing wounds, providing energy for physical and mental performance or even re-establishing a general sense of well-being.

See the referenced links below for more scientific explanations. There are many stories of people and animals that were not doing well under traditional treatment that had remarkable come backs while using BEMER. I have seen two such cases with my own eyes-Clyde and a gentleman that runs an animal rescue in Parker, Colorado. I have also felt the effects of BEMER on my own body. As a cyclist, I was able to ride long rides early in the season with minimal training and experienced quicker recovery times.

Unfortunately, our BEMER representative is traveling out of the country for the next several weeks. The Menagerie wills surely take in many animals that will benefit from BEMER therapy. Until we are in our new location, we feel this is the most important thing we can provide to the animals, outside of food and shelter and tennis balls.

To see lots of confusing words on how BEMER works click https://schweiz.bemergroup.com/en/method

To see how BEMER Veterinary Line is being used with horses Click https://veterinary.bemergroup.com/veterinary/en_US